Sad but true, I rarely post anything here anymore. I'm not closing down the space, as I like having all that history, and maybe I'll have something to add to here from time to time. But my writing focus lies elsewhere, so I thought it best to direct you there. The space you're sitting on right now has been offering somewhat diminished returns, and that's not apt to change significantly for the foreseeable future.

So, if you'd like to see what I'm writing about these days, head on over to my film blog, Beautiful Frauds.

And, to keep up with less formalized, single-serving thoughts, you can always follow me on Twitter, too.

This year's New Year's party was a rousing success. About 20ish people over the course of the evening, which puts it about average, but this was possibly the most animated and dance-tastic one since the final 15th Street party. We projected Kenneth Anger films on the wall, had a drunken "Common People" singalong, and reenacted Guns 'n' Roses' "November Rain" video. I was happy drunk, but not too drunk; no sickness, only a mild hangover. Welcome 2011!

Click here for the photo record as seen through our camera. 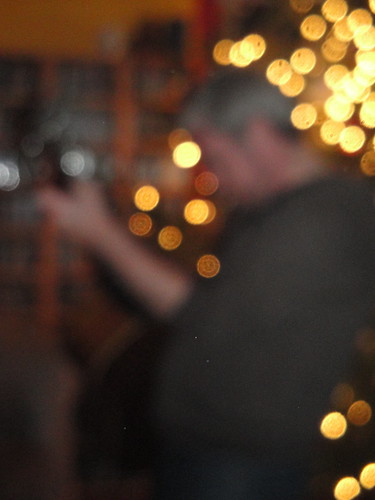 What were my favorite movies of 2010? Check them out in Popcorn & Candy: Looking Over Our Shoulder.

More reviews and such from the last couple of weeks:

A review of Steven Soderbergh's documentary about Spalding Gray, And Everything is Going Fine (NPR)

A review of Jim Carrey and Ewan McGregor as lovers in the con-artist comedy, I Love You Phillip Morris. (DCist)

A review of Angelina Jolie and Johnny Depp in the hugely underwhelming The Tourist. (DCist)

A review of Tanya Hamilton's insightful little indie about the aftermath of the most incendiary years of the civil rights movement in Night Catches Us. (DCist)

A twitter friend that one of my L.A. NEA cohorts hooked me up with recently interviewed me about film criticism for his writing podcast. For a peek into my mind unedited, to see what I'm talking about when I talk about film, check it out on his site.

Chronologically, since last we spoke...

A review of Gaspar Noé's Enter the Void. (DCist)

Film picks for the week of Nov. 18: Popcorn & Candy: Higher Than the Stars (DCist)

A review of the first part of the 7th installment of the Harry Potter series, Harry Potter and the Deathly Hallows, Part 1 (DCist)

Film picks for the week of Nov. 25: Popcorn & Candy: This Gun's For Hire (DCist)

A review of Edward Zwick's Love and Other Drugs. (DCist)

A review of Andrew Jarecki's All Good Things. (NPR)

A post reporting the year-end awards given out by the Washington Area Film Critics Association. (DCist)

At NPR, my review of Guy and Madeline on a Park Bench, one of the loveliest films I've seen this year.

And, at DCist, a review of Gareth Edward's modestly scaled creature feature, Monsters, and an interview with Chris Morris, the director of a wickedly funny satire about jihadist suicide bombers.

Posts from the last time I compiled them, in chronological order...

Two reviews that week at DCist, one for the big budget action comedy, Red, the other for a little South African romantic comedy, White Wedding

The next week, film picks for the week beginning Oct. 21: Popcorn & Candy: Return of the Shopping Dead

Two reviews at DCist that week as well, one of the latest Clint Eastwood-directed film, Hereafter, the other a British graphic novel adaptation from Stephen Frears called Tamara Drewe

Earlier this week at NPR, a review of the mid-week limited release of the music documentary, Strange Powers: Stephin Merritt and the Magnetic Fields

Also from earlier this week, a news story (I know! a news post! from me of all people!) about the re-opening of a long-defunct DC moviehouse, the West End Cinema.

And, finally, just one end-of-the-week review from me at DCist, the third installment of the Swedish language film adaptations of Stieg Larsson's Millennium trilogy, The Girl Who Kicked the Hornet's Nest

Once again, so busy that I'm way behind on posting new things. But that means that I've been writing a lot, which is always good, plus I was in NYC this past weekend for the New York Film Festival and general catching up and hanging out in the city (more on that later). Of special interest in this post, a milestone, plus a post at a brand new outlet.

So, let's go chronologically with this, starting where we left off.

A film review of David Fincher and Aaron Sorkin's fantastic retelling of the inspired genesis and sordid aftermath of the early days of Facebook, The Social Network. (DCist)

A film review of a really nice little thriller that takes place entirely inside a coffin containing Ryan Reynolds, buried under the sand in the Iraqi desert, Buried. (DCist)

A theatre review of Solas Nua's fun, if slightly ragged, production of the WWII-set Irish sci-fi musical, Improbable Frequency. This also happens to be my 500th post at DCist. Wow! (DCist)

Brand new outlet! Amanda Mattos, the former music editor at DCist, has her own music site these days known as Pinna Storm, and Chris Klimek started up a fun little chain-letter of a feature called "Exquisite Chord", a play on the old storytelling parlor game, "Exquisite Corpse", in which one person tells a sentence or two of a story, and then passes it on to someone else to continue. In this musical version, we're creating a playlist rather than a story, with each person's pick related in some way, no matter how tenuous, to that of the person who passed the turn to them. Alexandra Gutierrez picked the Delta 5's "Mind Your Own Business" and passed the baton to me; click here to see where I went with it. (Pinna Storm)

Another round of film picks, for the week starting October 6: Popcorn & Candy: Rising in the East. (DCist)

A film review of Stone, which features Ed Norton as a convicted arsonist, and Robet De Niro as his parole reviewer. (NPR)

A film/art review of Matthew Barney's Cremaster Cycle, his collection of 5 art films that are making their way back to DC for the first time in a few years. (DCist)